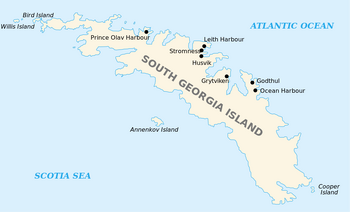 South Georgia and the South Sandwich Islands is a British overseas territory in the southern Atlantic Ocean. It is a remote and inhospitable collection of islands, consisting of South Georgia – which measures approximately 106 miles (171 km) by 18 miles (29 km) and is by far the largest island in the territory – and a chain of smaller islands known as the South Sandwich Islands lying about 400 miles (640 km) to the south-east.

There is no native population on any of the islands. At the start of the Twilight War, the only inhabitants were the British Government Officer, Deputy Postmaster, scientists, and support staff from the British Antarctic Survey who maintained scientific bases at Bird Island and at the capital, King Edward Point, as well as museum staff at nearby Grytviken and a platoon of Royal Marines based at King Edward Point.

The permanently cold sea maintains a cold maritime climate on the islands, and the weather is very variable and harsh. Typical daily maximum temperatures in South Georgia at sea level are around 0°C (32°F) in winter (August) and 8°C (46°F) in summer (January). Winter minimum temperatures are typically about −5°C (23°F) and rarely dip below −10°C (14°F). Annual precipitation in South Georgia is about 1500 mm (59 in), much of which falls as sleet or snow, which is possible in any month. Inland, the snow line in summer is at an altitude of about 300m.

Westerly winds blow throughout the year interspersed with periods of calm. This gives the eastern side of South Georgia (leeward side) a much pleasanter climate than the exposed western side. The prevailing weather conditions generally make the islands difficult to approach by ship, though the north coast of South Georgia has several large bays which provide good anchorage. During mountain wind conditions, the winds blow straight up the western side and straight down the eastern side of the mountains and become much warmer and drier; this produces the most pleasant conditions when temperatures can occasionally rise over 20°C on summer days. The highest ever recorded temperature was 23.5°C at Grytviken.

The seas surrounding South Georgia are cold throughout the year due to the proximity of the Antarctic Current. They usually remain free of pack ice in winter, though thin ice may form in sheltered bays, and icebergs are common. Sea temperatures drop to 0°C in late August and rise to around 4°C only in early April.

The South Sandwich Islands are much colder than South Georgia, being further south and more exposed to cold outbreaks from the Antarctic continent. They are also surrounded by sea ice from the middle of May to late November (even longer at their southern end).

After the Falklands War in 1982, a full-time British military presence was maintained at King Edward Point.

The main British military facility in the region is at RAF Mount Pleasant (and Mare Harbour) on East Falkland. Other than that, a handful of British naval vessels patrolled the region until naval losses during the Twilight War made this impractical.