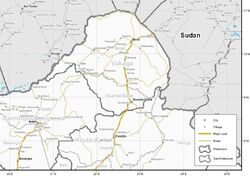 The Security Council, by its resolution 1778, approved the establishment in Chad and the Central African Republic, in concert with the European Union, of a multidimensional presence intended to help create the security conditions conducive to a voluntary, secure and sustainable return of refugees and displaced persons. The Council decided that the multidimensional presence shall include a United Nations Mission in the Central African Republic and Chad (MINURCAT).

The Situation So Far[]

You have been in the Central African Republic for twenty-two months, your tour was supposed to end ten months ago, but with the troubles, it seams that the powers that be have forgotten or abandoned you. The original mission was to monitor the transition of power after the 2008 coup and to protect the humanitarian missions going on in Central Africa. In a rare show of force the UN authorized a company of medium tanks and two mechanized infantry companies supported by two squadrons of attack helicopters.

About six months ago You where stationed near the CAR-Sudanese border in the small city of Birao. The peace talks between the Lord’s Resistance Army (LRA) and the government forces had been showing real promise for the last few weeks, so when the first rockets hit the northern guard tower and the front gate at just after 0115 no one was prepared. The assault that followed brought hundreds of fighters through the front gates and into the parade grounds. The first waves of LRA fighters took control of the motor pool and front gate. By the time an organized defense could be mounted the armory was overrun and the field hospital was on fire. We only had the ammunition in our magazines and the few crates that some of the more paranoid of us managed to hide in the barracks.

After about six hours of fighting we had regained control of the armory, even though it had been stripped bare. The motor pool was a mass of burning wrecks and dead bodies, and still under no one's control. Jacque, the Kolonel’s radio operator, told us that he was able to get a message out to Bangui requesting reinforcements, but the rebels took out the sat dish and antenna before UNHQ could respond. About 30 minutes later the mortar rounds started raining down on the town and the base. The large explosion to the Northwest of us had to have been the fuel depot for the UN convoys that supply us twice a week, until it became too hot for them to drive through.

From the looks of it, it was going to be a long day. Kolonel Werkman ordered a group of us to make contact with the units holding a bridge 60km to the North, near the Sudanese border. He also ordered two groups to head to Manou to get reinforcements.